Last week we lost one of our own, Team C4C member Rob Bateman.
Rob was fully committed to the purposes of Team C4C. Here's what Rob shared with Cycling Utah Magazine in this August's issue: “I enjoy riding with a team that wants to make a difference in the lives of others. It impresses me that a group of people at all different levels of ability would start an event with prayer for those who are afflicted and would dedicate their exertions to finding a cure for the illnesses of others. This takes something that we all love to do (cycling) and gives it meaning beyond self.” 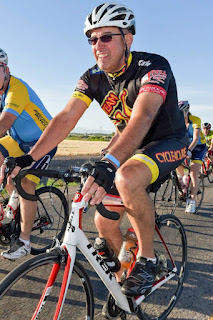 Rob became hooked on cycling as a teenager in Germany, where his father was stationed with the US Army. He found that cycling in the mountains gave him a powerful sense of freedom while requiring a real commitment in return.

His own career in the US Foreign Service and later, with ProModel Corporation, took him to more than 60 other countries. After serving as mayor of Eagle Mountain (2000) and finishing his PhD at the University of Utah (2003), he began riding long events in Utah and Idaho.

Since 2005, he spent most of the year in the Middle East where he taught public administration and international business. His training usually consisted of rides through the desert where he dodged the occasional camel or oryx. He cycled with Team C4C during summers at home in Utah with his six children and their families.

Rob's mother, DeNai Bateman (nee McMullin), passed away last year from complications associated with multiple myeloma, a rare form of bone cancer. Her life of compassion and service was extended for eight years by experimental treatments developed through medical research. Rob rode in her memory and in hope that funds raised through his cycling could ease the lives of others with serious illness.

Team C4C honors Rob's memory and offers its condolences and prayers to the entire Bateman family. We will all miss Rob's love of cycling, his tenacity, and his generosity of spirit.
Posted by Jstar at 8:31 PM